As the left becomes more radicalized, and as they continue pushing their Marxist agenda in America’s colleges, universities, and schools, they know no bounds. Already they have a line of merchandise to push their most radically left and Marxist ideologues onto America’s youth, in the hope that they will grow up considering them heroes, as well as to influence them to embrace the radical ideologically Marxist agenda!

Interestingly, one day after California Socialist Kamala Hill announced her plans to jump into the Democrat pool of radically Marxist embracing candidates to run for President in 2020, The Hill reported that…

In the span of a week, Sen. Kamala Harris has transformed into both a 2020 White House contender … and an action figure.

The California Democrat is the latest political celebrity to get a mini-me version of herself from the company FCTRY.

“Think of the impact California has had on our culture,” FCTRY CEO Jason Feinberg said in a statement about the company’s Harris doll. “Same-sex marriage. Computers, of course. Movies. Even small things like avocado toast! As a proud New Yorker, it’s a little hard to admit this, but California always figures things out a bit before the rest of us.”

In the same week, it was reported by the Gateway Pundit that Kamala Harris got her first state jobs worth over $400,000 during a time when she was having an affair with the former San Francisco Mayor Willie Brown. Former Mayor Brown is the father of three children. and married to Blanch Vitero. From there, Kamala Harris launched her political career and is now what Democrats claim is the future of the Party!…WHY? Because she is not only a pit-bull when it comes to venemously attacking whites, AND ESPECIALLY white men and their so-called toxic-masculinity, but she is able to be restrained when needed, similar to Obama, despite her radically left-leaning Marxist beliefs and aspirations for America! 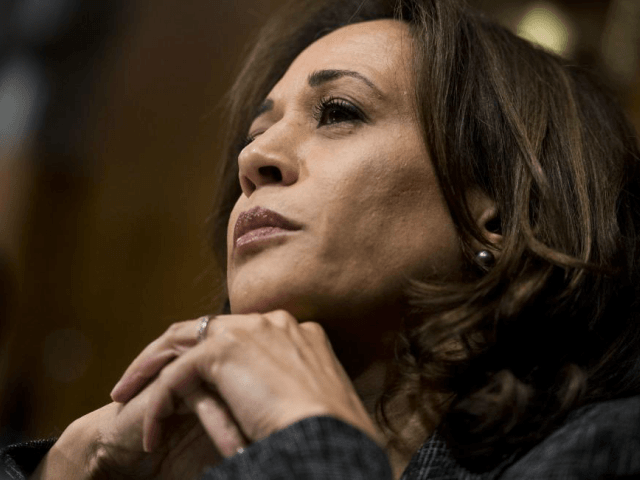 How radical is Kamala Harris (D-CA)? She is an ardent opponent to a border wall, and instead believes in open borders and supports sanctuary cities. Harris has attacked President Trump’s plan for a border wall, and called it “a medieval vanity project.” Also, she said Americans should be willing and open to paying for not only Americans medical expenses, but all human beings on the earth! Therefore, she has openly pushed for “Medicare for All” as she believes that the government should have the right to confiscate the American people’s wealth and use that money to pay for anyone who comes to America’s for medical treatment, both foreign and domestic! Kamala Harris also declared that not only healthcare was a “fundamental right”, but also” education is a fundamental right” as well, as she said that pre-K and college should be free to all who want it.

Harris’ comments, along with the whole of the Democrat Party rings back to a wise woman’s words! Margaret Thatcher who was the Prime Minister of the United Kingdom from 1979 to 1990 who once said…

On Sunday, when Harris announced her 2020 campaign for President in her hometown of Oakland California, she said…

Harris attacked the Presidents idea of building a wall or barrier as a “medieval vanity project”, and went on to accuse the President of “human rights abuses” and said…

“Folks, on the subject of transnational gangs, let’s be perfectly clear: The president’s medieval vanity project is not going to stop them. When we have children in cages, crying for their mothers and fathers, don’t you dare call that border security. That’s a human rights abuse!”

However, Kamala Harris failed to note that it was former Presidential Administrations who implemented the policy, and it was the Democrats who denied President Trump and Republicans attempts to fix the system! Regardless, political radicals like Kamala Harris always tend to gloss over facts, in their efforts to subvert the Constitution and implement their Marxist Socialism!

Furthermore, Harris didn’t stop there! She went on to state that she plans to reverse the tax cuts that President Trump has implemented, which have jump-started the economy into a raging fire, as Americans are now seeing the benefits of limited taxation. Not only do Americans now have more money in their pockets, but revenue for the government is up! Regardless, she said that she considered it

“the largest working and middle-class tax cut in decades.”

“the American Dream and our American democracy are under attack and on the line like never before. America, we are better than this! People in power are trying to convince us that the villain in our American story is each other. But that is not our story. That is not who we are. That’s not our America. The United States of America is not about us against them. It’s about ‘We the People.'”

Her statements are ironic since it is her and her radically Progressive Democrats who are espousing hate and racism, encouraging violence and division, and all while they try to project that hate and racist attitudes onto their political opponents.

Harris’ campaign slogan “For the People” was alluded to in her speech as to what it meant to her. Although she opposed the Presidents attempts to help non-violent felons and reform the criminal justice system, she said it doesn’t go far enough to alleviate the pain inflicted upon criminal felons in America. She said…

“For the People’ meant fighting for a more fair criminal justice system at the height of the war on drugs by creating a first-of-its-kind initiative to allow first-time offenders to get skills and job training instead of jail time — at a time when reentry and prevention and redemption were not in the vocabulary or mindset of most district attorneys. “

Therefore, commit a criminal felony, and the American taxpayer will pay for your education to learn a trade, free of charge!

She added that the criminal justice system needs…

So far in past races, Kamala Harris has seen the press brush over her history, with little to no scrutiny, and the Mainstream Media has vowed to continue providing cover for her actions and statements! For example, a senior adviser for Sen. Harris, Larry Wallace resigned in December, when the Sacramento Bee “inquired about a $400,000 harassment and retaliation settlement that resulted from his time working under Harris at the California DOJ. Kamala Harris said that she was unaware of any inappropriate behavior which led to the settlement, but never-the-less, she received virtually no scrutiny for the incident, as she is a rising star amongst the Marxist ideologues!

In fact, just this weekend, the Media refused to scrutinize her own false and misleading statements. For example, as the former Attorney General of California, one would think that Harris knows the law! However, after the Mueller Special Counsel dispatched FBI operatives to raid the home of 66-year-old Roger Stone with full tactical gear, night vision, and more firepower than the Navy Seals used to capture Osama-Bin-Laden! And then, Roger Stone posted a $250,000 signature bond, she went on the offensive. She tweeted…

Roger Stone is out on $250,000 bail just hours after his arrest while people across our country sit in jail for days, months, or even years because they can’t afford to pay their bail. It’s unjust. We need to reform this broken system.

However, her comment fully shows either her lack of knowledge for the laws of our nation, or her belief that the Mainstream Media and Democrats would provide cover for her lunacy and blatant falsehood! However, Attorney Robert Barnes quickly corrected the confused former Attorney General and 2020 Democrat Candidate, as he pointed out that…

The new Democratic candidate for President doesn't appear to know that a personal recognizance $250K bail in our federal justice system doesn't cost one penny. They call it a "signature" bond. It is a "forfeiture" amount if you jump bail & requires zero collateral & zero cash. https://t.co/n0ZOOy5sPa

Kamala also pulled the popular Marxist rabbit trick, as she claimed that global warming was behind devastating natural disasters Americans see every year, including wildfires and hurricanes. She said…

“Let’s speak truth — climate change is real and it is happening now. Everybody here knows from wildfires in the west to hurricanes in the east to floods and droughts in the heartland, but we’re not going to buy the lie, we’re going to act based on science fact, not science fiction.”

However, Kamala is simply peddling ‘junk science’, just as former Vice President Al Gore who predicted the world would end in 2018 due to global warming! In fact, Marxists push the junk science reports that are based on assumptions and ideology, rather than hard scientific evidence! Instead, it is a way for hard-line Marxist Elites to control the people in America through government controls and regulations while stating that they are doing it for the good of all mankind! Regardless, the Mainstream Media provides cover and glosses over the facts that don’t support their ideological vision!

In addition to providing Harris cover, the day after Senator Kamala Harris (D-CA) announced her 2020 candidacy for President of the United States, the left launched her own action figure into the ‘Marxist Collection’! The ‘Marxist Collection even includes a Trump doll that depicts him as giving the finger to everyone! They included removable hair, Twitter-sized hands, sturdy durable shoes for stepping on people, as they claim, incredibly deep pockets which they say are incapable of opening, and a large rotating head because they say it is to hold…unique ideas!

In all, as President Trump continues to gain momentum amongst the Democrats so-called own demographics of Blacks and especially Hispanics, the left continue their assault on our nations Constitution, our Capitalist system of government, and the fact that they work for ‘We the People’! Therefore, they will continue to hide the truth, smear their opponents, use hate, racism, and violence against those who resist! WHY? Because, that is the only way that Marxist ideologies like Communism, Fascism, Socialism, and Progressivism can actually overthrow the ‘will of the people’!