California Democrat told off California freelancers and independent contractors who are wanting to get back to work.

California Democrat told off California freelancers and independent contractors who are wanting to get back to work. 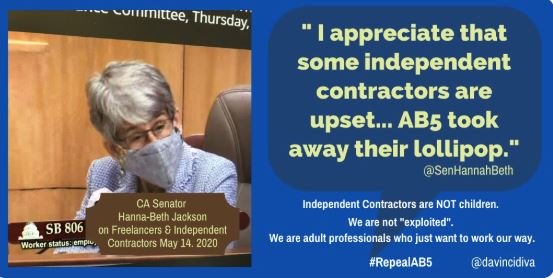 Democrat Hannah-Beth Jackson told them, “I appreciate that some independent contractors are upset… AB5 took away their lollipop.”

She thinks their jobs are “lollipops”?

Via Kira Davis on RedState:

Senator Hannah-Beth Jackson represents the 19th District in western Ventura County and Santa Barbara County. In a Senate Labor, Public Employment and Retirement meeting officials heard arguments for and against pushing forward SB 806 and SB990. The bills — put forth by Republican senators John Moorlach (R-Costa Mesa) and Shannon Grove (R-Bakersfield) — aimed to immediately suspend and amend the disastrous AB5 legislation that killed independent contracting/freelance jobs across the state. Moorlach and Grove have been two politicians at the forefront of pushing back against the behemoth job-killer, alongside other Republicans in the assembly, like Kevin Kiley (R-06). Even before the coronavirus caused state leaders to close businesses and end millions of jobs, hundreds of thousands of jobs across over 150 job designations had been lost overnight to the bill meant to only affect Uber and Lyft. The state was already facing massive unemployment and the bill’s author, Lorena Gonzalez (D-80), has been under fire ever since.

Like Gonzalez, Senator Jackson has been a voice for unions in the legislature, so it is no surprise she also has supported AB5 enthusiastically. What has been a surprise is how cruel and dismissive elected representatives like Gonzalez and Jackson have been as tens of thousands of independently employed artists, interpreters, dancers, translators and more have come forward to beg for a dismissal or at least a suspension of the law at least until the legislature fixes the issues and finishes adding the dozens of currently proposed amendments.

Continue reading: California Senator to Unemployed Freelancers: You’re Upset Because We Took Away Your “Lollipops”