For a number of years, Democrats have been pushing wholeheartedly in Social Justice and Socialization of industries, healthcare, and other businesses! Meanwhile, they have confiscated the largest amounts of wealth from their citizenry, leading to large homeless populations, a decreasing middle class, a growing impoverished class, and an empowered and wealthy elitist political and social class in their cities! As a result, it has led to some of the greatest debt loads, in comparison to conservative controlled districts, cities, and towns!

Truth in Accounting has released its 2020 Financial State of Cities report, highlighting the fiscal health of America’s 75 most populous cities. Statista’s Niall McCarthy notes that the study found that this year, 63 cities do not have enough money to pay their bills and total municipal debt now stands at $323 billion.

It ranked the cities according to their taxpayer burden or surplus which is the amount each taxpayer would have to pay to clear municipal debt with nothing, such as benefits and services, in exchange. 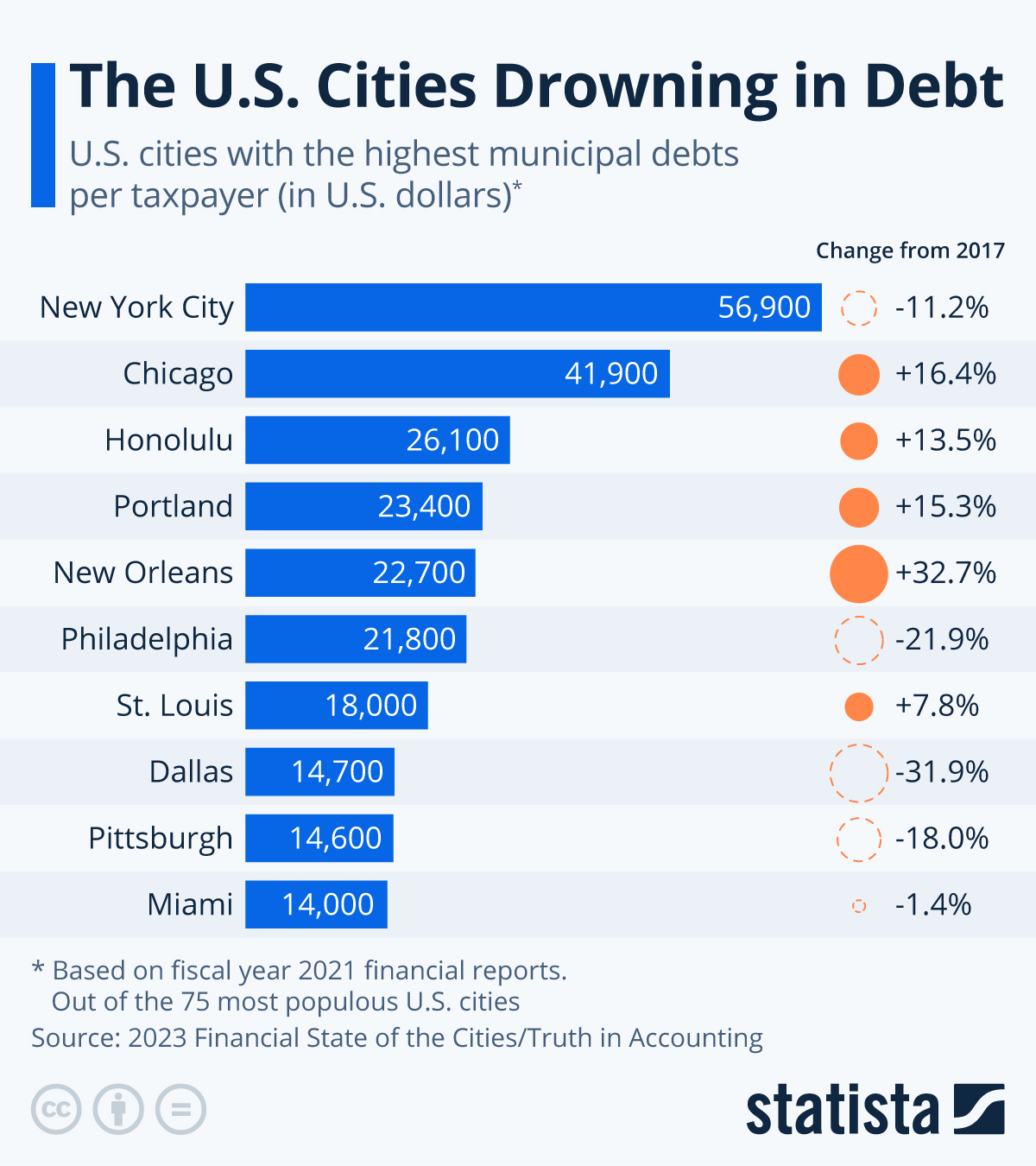 You will find more infographics at Statista

In Chicago, each taxpayer would have to pay $63,100 in future taxes without anything in return while Hononulu has the third-highest burden at $26,400.

Sadly, that is the cost of Socialism and Marxism, which the Democrats now want to implement nationwide, despite its devastating effects on the Democrat-controlled cities already!

In ‘Masked Marxism’, we explored the cost of Socialism in America on ENR, where we detailed the dastardly effects it has had on American cities!

‘Masked Marxism’ was a series on the cost of those left-wing Socialist policies that are already being embraced and realized in the United States of America, as it consumes entire cities and states! Sadly, too many left-wing Democrat-controlled cities and States are leading their constituents into the ‘third-world’ realm of poverty, sickness, disease, and death, and at record speed!

Just how many homeless live in Anaheim California? It is shocking…

Therefore, while California encourages poor and homeless refugees from Central America, THEY CANNOT EVEN HELP OR TAKE CARE OF THEIR OWN!

Sadly, over the past few years, Democrats have embraced a notion of what they call ‘democratic socialism’, as they claim it is a new type of Socialism, that benefits the people! Bernie Sanders and so-called Democratic Socialists define it as…

However, does it really represent the 99%? In truth, NO! In fact, the very idea of ‘Democratic Socialism’ is a fiction, an oxymoron, and a mythological idea! In fact, any kind of Socialism, as defined by proponents and opponents, as the absence of private property. Therefore, it results at the end of individuals and corporations owning, improving, and exchanging resources, goods, and services. The elimination of private property is a central feature of socialism.

Meanwhile, no matter how you serve it up, how you dress it, or how you glorify Socialism, other nations have repeatedly tried the same Socialist slop that Bernie Sanders, Ocasio-Cortez, and other Democrats are trying to shove down the throats of the American people, but they are now unable to maintain their now struggling countries, and many have failed altogether!

Just one example is Venezuela, where a proud Socialist Hugo Chavez, was elected overwhelmingly in 1999 as President! He destroyed the Democratic institutions once he took power, and the nation spiraled from one of the most wealthy and prosperous nations on the planet to a nation where homelessness, rationing, drug abuse, and other problems ravaged the streets! Now, the streets are covered with the desperate and hungry, as they eat out of trashcans, and are left desperate for handouts from the government, which they won’t get!

Now, throughout pockets of America, there are states and cities who have become completely controlled by so-called Democratic Socialists, as they pleaded with their voters to put them into office, and they would show ‘compassion’ towards the poor, the homeless, the criminals, and the drug afflicted! As a result, cities like Seattle, New York, San Francisco, Sacramento, Chicago, Portland, and even entire states like California have become wholly or predominantly controlled by pro-socialist Democrats! Now, as a result of the voters giving them power, they have decimated businesses, corporations, and entire industries, in their effort to control all aspects of economic activity! That has resulted in a restriction of the citizen’s available choices and decisions, and a loss of the individual’s political power over the government! Also, it has resulted in massive economic contractions, as businesses, corporations, and industries leave Democrat-controlled areas! Now, as a result of Marxist based legislation, it has led to massive job losses, home foreclosures, skyrocketing mortgages, and economic instability! That has led to homelessness, skyrocketing drug abuse, mental issues, and so much more!

Now, in cities across the nation, what started out as an alleged ‘movement of compassion’, has become incompassionate! A movement that was said to be for the good of the 99%, has ravaged those very people, only to further enrich and empower the 1%, as the political elites gain power and wealth, while the 99% falls into desperation and dependence!

Today, the false idea of Democratic Socialism has misled entire cities and states to abandon the needs of each individual, for the good of the Elites, whether it is the Political, Social, or Fiscal Elites! Meanwhile, like all good Marxists, they have embraced and pushed the ideological concept of Socialism on their constituents, in their effort to control all aspects of economic activity, and to restrict the available choices and decisions of individuals, including political power of those individuals!

Sadly, history would tell us that Socialism has always led to the end of private property and markets, impoverishment, desperation, and even death! Ultimately, socialism is incompatible with democracy because democracy empowers the individual. Democracy tolerates dissent, individual differences, compromise! All of these ideals are impossible through Socialism, regardless of Socialism’s political and structural framework, whether it be a Dictatorship, Monarchy, Marxism, or a fancy and false-flag ideology like ‘Democratic Socialism’!

Ironically, Socialism cannot succeed without capital, which is why Margaret Thatcher’s famous quote came to a realization! In fact, Thatcher so eloquently said…

After all, without capital, economic growth and justice have no sustainable sponsor! Therefore, Socialist or government-owned enterprises are starved for capital, such as roadways, subways, water and sewer systems.  Also, public utilities fail, as municipal finance would have no exchange and no investors, with the dearth of bond markets soon enough would lead to derelict infrastructure everywhere.

Now, as a result of the radical left-wing Socialist/Marxist, or as they put it… ‘Democratic Socialist’ policies, too many American cities are faltering and failing, as they strip political and economic power from the people! Too many cities are falling into crime, as the people lose their homes, live on the streets, eat from trash cans, become addicted to drugs, and become desperate! As a result, too many American cities are becoming saturated with feces, drug needles, tents and shanty’s, as well as dilapidated! AND ALL THANKS TO WHATEVER YOU WANT TO CALL IT, WHETHER YOU CALL IT MARXISM, COMMUNISM, FASCISM, SOCIALISM, OR DEMOCRATIC-SOCIALISM because they are all the same! A concentration of power and wealth from the hands of the many, into the hands of a few!