As Democrats push for Red Flag laws to be implemented throughout the United States, some States, which are controlled by Democrat politicians are revealing that the concerns over 2nd Amendment rights are valid and real. In fact, one of the most serious concerns over ‘Red Flag’ laws is that the government can arbitrarily determine anyone they want to take guns from as being mentally insane or a threat, and then confiscate their guns, regardless of merit, valid just cause, or due process!

In fact, in 2017, Democrats in the Oregon Legislature narrowly passed the state’s red-flag law, without Republican support! Then, Gov. Kate Brown (D-OR) signed the bill into law, which took effect on January 1, 2018.

Then last month, in August of 2019, the FBI seized a former United States Marine’s four legally owned weapons, for saying online that if Antifa members attacked him, he would “slaughter” them in self-defense!

It was in response to the ramped-up attacks that AntiFa has made against those who oppose their Marxist agenda, leaving numerous pro-America, pro-Constitutional Americans injured, and one with head and brain trauma! 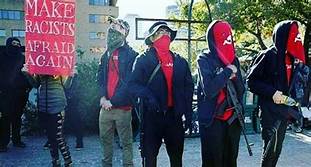 In response, the Marine, Shane Kohfield took to a microphone at a pro-America rally outside of the Portland Mayor Ted Wheeler’s home and stated to the crowd that…

“If AntiFa gets to the point where they start killing us, I’m going to kill them next. I’d slaughter them, and I have a detailed plan on how I would wipe out AntiFa.”

Interestingly, although AntiFa has not only threatened bodily injury to pro-MAGA supporters, pro-America citizens, and pro-Constitutional Americans, they have also shown up fully armed, and then they have injured and hospitalized those who fight for America, and against Communist ideological agenda! Regardless, the Oregan government, in conjunction with the FBI, have refused to not only respond to AntiFa’s threats and violence against their fellow Americans, but they have stood by and allowed their attacks to continue.

Meanwhile, they have used Oregan’s ‘Red Flag’ laws to target those who vow to defend themselves and their families, with lethal force if necessary! Americans like the former Marine Shane Kohfield, as they raided his home within days of his comments and unconstitutionally seized his guns, leaving him defenseless, without accusing him or alleging any crime!

A former Marine who said at a protest that he would “slaughter” Antifa members in self-defense if attacked, recently had his five weapons confiscated by the FBI, according to reports.

The temporary seizure came through the use of Oregon’s “red flag” law, which allows law enforcement agencies and family members to seek a court order to have weapons taken away from an individual viewed as potentially violent. Such laws are often opposed by supporters of Second Amendment gun rights.

The former Marine, Shane Kohfield, 32, was not charged with any crime, but surrendered five guns, including an AR-15 rifle, according to Phil Lemman, Oregon’s acting deputy state court administrator, the Washington Examiner reported.

Already, Shane has been a thorn in the side of Oregon’s political establishment, as his concerns about the weaponization of AntiFa grew, so he had written to U.S. Representative Dan Crenshaw (R-TX), who is also a veteran and former Navy SEAL, and tried to get AntiFa declared a terrorist organization! Fox News added that…

Kohfield previously wrote to U.S. Rep. Dan Crenshaw, R-Texas, a former Navy SEAL, to share his concern about Antifa and voice his support for having the group declared a terrorist organization, a step that President Trump has considered.

Portland has been the site of frequent violent clashes between members of far-left Antifa and supporters of conservative groups such as Proud Boys. The mayor and other city officials have faced criticism for their handling of such events.

In addition, Kohfield’s weapons were not the only liberty taken! In fact, it was reported that after serving two honorable tours of duty in Iraq, in defense of America’s freedoms and liberties, his expression of concerns over the growing Marxist threats and violence against other Americans led to the Oregan government committing him to a veterans hospital for twenty days for psychological treatment.

Also, in addition to his guns being taken, and being committed, he has been barred from participating in any events that protest AntiFa in Portland, Oregan!

In the end, Kohfield said that although some may have thought that he looked threatening, especially since he had training in the Marines, he never intended to cause harm.

Regardless, as the FBI refuses to comment, Kohfield has had his weapons illegally seized, been committed to a Veterans hospital, and been banned from participating in events against a terror organization that has threatened his life, as well as countless fellow Americans who stand up for freedom, justice, and our Constitutional Republic!

One thought on “RED FLAG LAWS USED TO TARGET PATRIOTS AND PROTECT ANTIFA: FBI Seizes X-Marine’s Weapons, Commits Him To Hospital, And Ban’s Speech Against AntiFa, For Saying He Would Defend Himself Against AntiFa Assault”