Earlier this week, Fox News joined in with the other Mainstream Media outlets to ban a campaign ad that was released by President Trump. The ad highlighted the dangers that prevail within the group of illegal aliens who make up the caravan.

It is outrageous what the Democrats are doing to our Country. Vote Republican now! https://t.co/0pWiwCHGbh pic.twitter.com/2crea9HF7G

Ultimately, it did not play well with the Open Border Democrat Party, or their Mainstream Media allies, as it was an effective tool against the Open-Border advocates on the left. Consequently, CNN immediately banned the ad from their network. Soon after, other Mainstream Media outlets followed suit like ABC, NBC, CBS, and others. Then, they put pressure on Fox News to do the same, and won.

Now, following CNN’s example, and the immense pressure from the Mainstream Media and left-wing groups, the Fox News Channel announced that it decided to pull the Trump-approved campaign advertisement about the migrant caravan marching towards the U.S. border.

Now, Fox News openly condemns Sean Hannity, and Judge Jeanine Pirro for joining the President on the stage, when asked to do so by the President on Monday night in Cape Girardeau, Missouri.

Democrats and the Mainstream Media were already criticizing Mr. Hannity, because the President listed him as a  “special guest” at the rally, but Hannity, as well as Fox News Network assured viewers that he would not be campaigning with the president.

Instead, Sean Hannity said that he would be broadcasting live from the rally, and would hold an interview with the president. Then, without expecting it, the President invited Pirro and Hannity to join him onstage, and to speak. 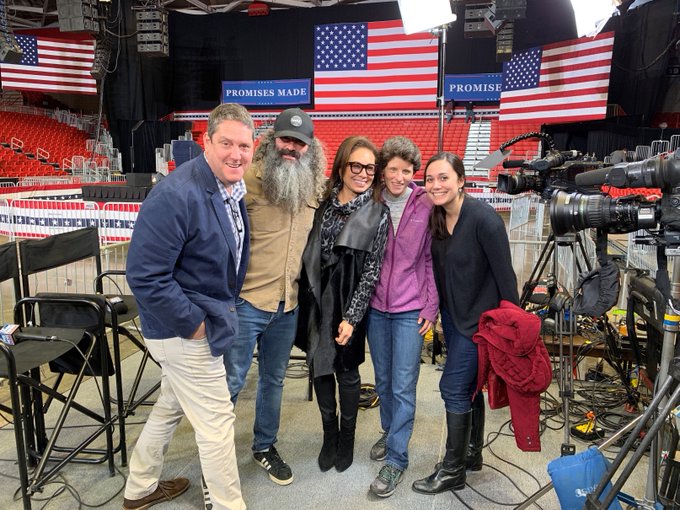 In Missouri yesterday with the @FoxNews team watching stage prep for the TRUMP RALLY. #hannity

Upon taking the microphone, Hannity said…

“Mr. President, I did an opening monologue today and I had no idea you were going to invite me up here.”

Hannity then went on to call the Mainstream Media ‘fake news’.

What I said in my tweet yesterday was 100% truthful. When the POTUS invited me on stage to give a few remarks last night, I was surprised, yet honored by the president’s request. This was NOT planned.

To be clear, I was not referring to my journalist colleagues at FOX News in those remarks. They do amazing work day in and day out in a fair and balanced way and It is an honor to work with such great professionals.

In the end, Hannity is Fox News highest-rated program, which brought in 3 1/2 million viewers during October. Regardless, the radically left socialist-progressives in the DNC, Mainstream Media, and Hollywood are looking for ANY REASON to silence Sean Hannity, Rush Limbaugh, Tucker Carlson, Judge Pirro, Mark Levin, and other conservatives, who refuse to bow to their radical agenda. ANYTHING!

One thought on “Just One Day After Fox News Bans President Trump’s Illegal Alien Caravan Ad, They Condemn Their Own Sean Hannity And Judge Janine Pirro”