Every time a tragedy occurs in America, people begin asking the big question of why? Do we not live in the greatest, most powerful country in the world? Wasn’t our country founded on tolerance and freedom? Are guns to blame for the shootings? Is America experiencing a plague of mental illness? They are all great questions, but do they truly get down to the root of the problem?

Within hours of the Las Vegas shooting,  Progressive Democrat’s began saying that the problem is gun ownership. Democrat’s immediately called for gun control, while Mainstream Media Outlet’s like the NY Times called for a full repeal of the 2nd Amendment. Hillary Clinton even said, “Imagine the deaths if Stephen Paddock used a silencer?” Meanwhile, Hollywood Stars like Stephen Colbert blamed the NRA and Gun Toting Republicans. Some Left-Wing Progressive Socialists even celebrated the deaths because the shooting took place at a country music concert, and likely constituted more Trump supporters than not. But amid the radical, exaggerated, and sometimes sick knee jerk reactions, are guns truly the cause of Stephen Paddock murdering American’s in Las Vegas? Would taking guns away from American’s really stop incident’s like those in Vegas? To answer that question, you have to dive further into the gun control debate.

In 2014 the Crime Prevention Research Center (CPRC) released a revised report showing 92% of mass public shootings between January 2009 and July 2014 took place in gun-free zones. The statistics show that criminal’s are more likely to attack in area’s where they know that American’s cannot defend themselves. These statistics have only solidified in more recent years. 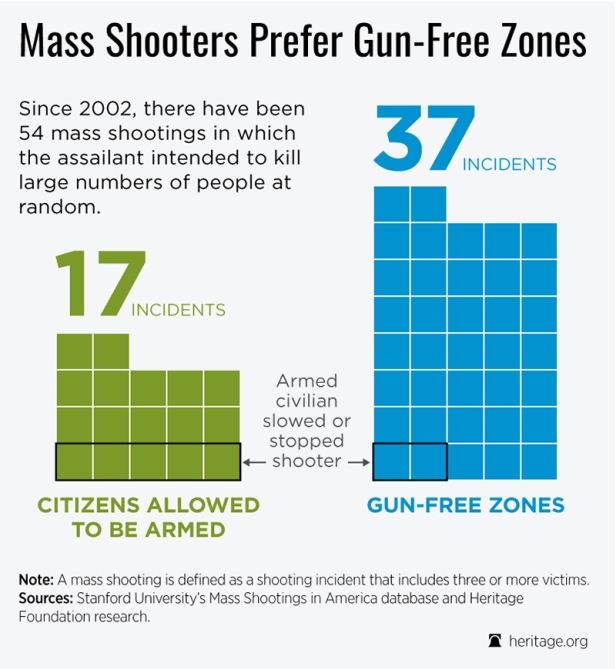 In addition, would repealing the 2nd Amendment truly be the answer to taking guns from criminals and ending mass murder? The answer once again would have to be no. Throughout America’s history, lawmakers have tried to control items and substances that are available to American’s, but failed every time. Our government has fought to control and end narcotics trafficking, alcohol during prohibition and in the hands of minors, and handguns and illegal weapons. In each instance, our government only created a vacuum for the sale of illegal street drugs and drug cartel smuggling across the border, the rise of illegal alcohol sales, gave rise to the mafia’s power during prohibition, and black market gun sales by criminals. Therefore, repealing the 2’nd Amendment is truly not an answer to the debate. Also, if a mass murderer truly wants to kill a large number of people, they can create a bomb using easily accessible items like the ones in Paddock’s vehicle in Las Vegas. Terrorists have even used vehicles as a weapon which have been known to be more deadly than a gun by murdering larger numbers of civilians, so should we outlaw automobiles?

What we do know about Paddock, is that he participated in the ‘Anti-Hate, Anti-Trump’ protests in Nevada. Some believe, that it might come out that he targeted ‘Conservative Trump Supporters’, which could have made him a likely recruit for the ISIS Terror Organization. Erick Paddock, the brother of the shooter, stated that Stephen Paddock had “no religion”, but Paddock and ISIS have a common goal in mind. They both wanted to kill, and strike fear into the heart of America.

This gets us down to the root of the problem in America, and why mass shootings have become more common. Radical Islamic Terrorists believe that they are soldiers, doing the will of Allah. They believe that by killing American’s and infidels, they will go to paradise. Stephen Paddock does not believe in this at all. Like Erick Paddock said, his brother had ‘no religion’. Without religion, without the belief in God’s law, without the belief in heaven or hell as a reward or punishment, there can be no man-made law that would deter a man like Paddock who have made the decision to commit such atrocities, and end it all. If you consider that Nevada has the death penalty, and Paddock would likely be sentenced to death for his atrocious and calculated act, no death penalty or any other punishment could deter him.

In the end, our country has in recent years turned it’s back on one of the most important and stabilizing components of our Countries foundation. One that our Founding Father’s believed to be so important that they safeguarded it as one of the basic inalienable rights of the Constitution of the United States. The right to believe and worship God was what made our Country thrive and become a beacon of light to the rest of the world. It is a right that Communists despise throughout the world and within our Country. The belief in God, threaten’s the core principles in any Progressive or Communist based government, and if American’s continue to turn their back on God, we will certainly see the rise of hate groups like ANTIFA, Black Lives Matter, and other Left-Wing extremist groups. We will continue to see attacks on Christians, Conservative’s, and on the basic fabric of our Country, the Constitution of the United States of America. If we turn our back on God, we are turning our back on our country, and the future of ourselves and our children. In the end, if we turn our back on God, we will likely continue to see a rise in terrorist attacks and mass murders. In the end, without God, we will continue to see more massacres like the one in Las Vegas.

2 thoughts on “The Cause of the Las Vegas Massacre: Are Guns To Blame?”